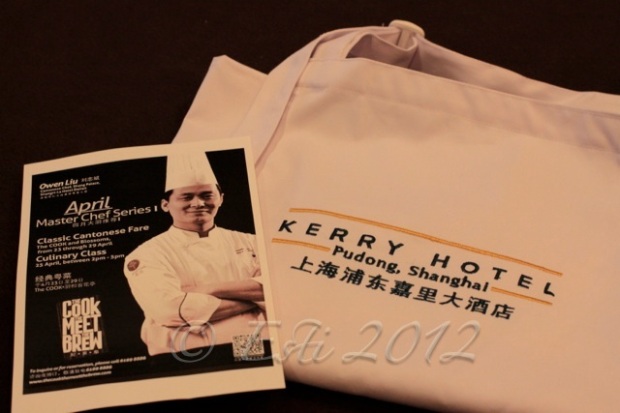 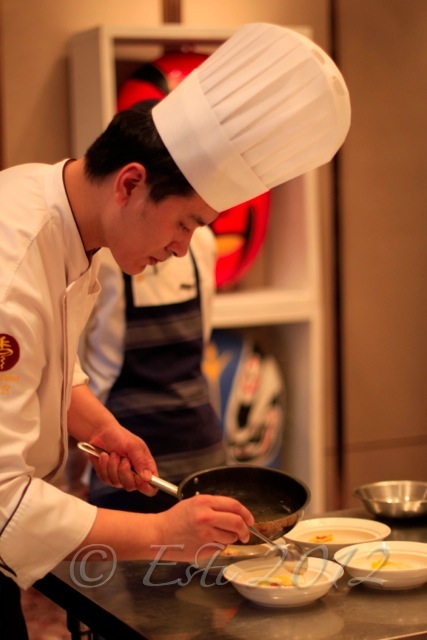 What a great opportunity to learn Chinese Cooking from the Master, it was still part of Master Chef April event at Kerry Hotel (last week I went to Pastry Baking Class – Strawberry Fields), today I attended Classic Cantonese cooking class hosted by Owen Liu, Cantonese Chef of Shang Palace, Shangri-La Hotel Dalian. When I arrived at the venue I was given an apron and recipe booklet, they serve assorted refreshments while I glance quickly to the recipe. I saw that we are going to learn to make 2 seafood dishes and 2 meat dishes. The class were conducted in Mandarin and translated by Donald, one of the hotel staff.

First lesson was baked salmon fillet with rock salt,  Chef Owen was making the dish while the class watch his every single move and make notes. Best part was once the dish portioned and garnished nicely the waiter then serve it to all class participants!

The second recipe was prawn with wasabi mayonaise (this is deliciously rich). Third was beef spareribs with blackpepper sauce (the meat was so tender with perfect spicy sauce) and the last dish was braised baby chinese cabbage with egg dumpling, absolutely delicious and quite easy to make. I would like to share the recipe here, so you can try it yourself.

*to make the sauce;

1 tsp goji berry, soaked in water to soften it

1. Whisk the egg in a bowl, with a nonstick pan make several thin omelette, using a round cutter make the dumpling wrapper from the omelette.

2. Mix minced pork and mushroom with salt for the filling.

3.  On a cutting board place a dumpling wrapper and dollop about a teaspoon or so of the filling onto the center, wet the edge of the wrapper with small amount of egg mixture, fold it over, and then crimp the edge to seal it.

4. Arrange the dumplings on a basket steamer, steam for 5 minutes.

5. In the meantime, braised the baby chinese cabbage in hot water until the tip softened (less than 10 minutes), strained  from the water.

6. Make the sauce, heat the chicken stock in a pan, add goji berry, soya sauce and salt to taste.

7. Arrange the cabbage and the egg dumpling in a bowl, add the sauce, serve immediately. 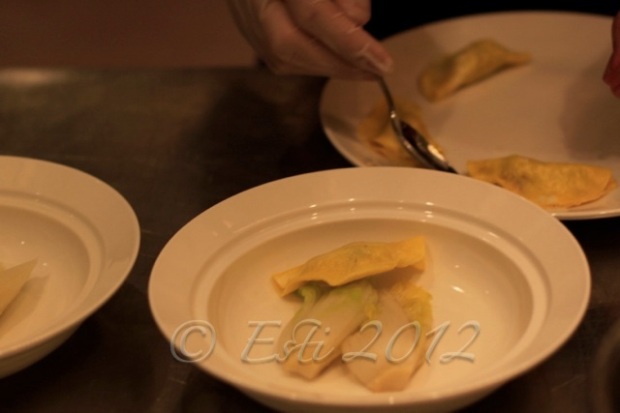 I really enjoyed my first chinese cooking class, looking forward to learn more dishes in the near future. If you want to sample Chef Owen special menu you can go to the Cook at Kerry Hotel to try the classic Cantonese fare prepared by him until April 29th, 2012. 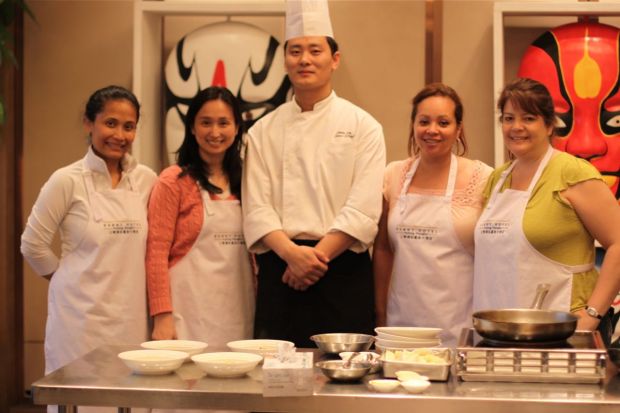